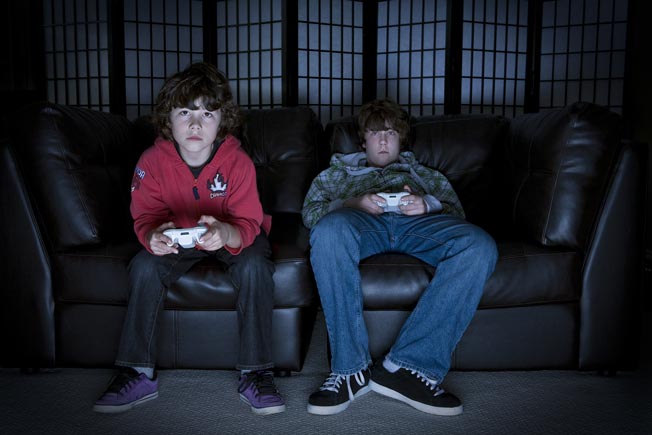 Online gaming addiction is real. You can read this post about creative ways to nurture healthy boundaries around screen time for younger children, but some of you may be shaking your head saying, “My kid is beyond that point… he is addicted.”

Perhaps anytime you attempt to corral efforts at managing online gaming, you run up against a wall. Maybe your child or teenager is moody, sneaking time online or is lying about her online use. These and other symptoms are typical of an unhealthy online gaming obsession, according to WebMD. You need help with the battle to help your child break a habit that may have started out innocently enough, but now has turned into a full-blown craving by which they seem to be enslaved.

You are not alone.

Here’s how one family started to help their son break his online gaming addiction as it had spiralled out of control.

Some kids can regulate their computer use with fairly minimal guidance. Dillon was not one of those kids. At 14, he was extremely intense, and obsessed with online interactive video games, especially Minecraft. He also played an empire building game that wasn’t as time-consuming but needed frequent daily attention.

No matter how hard his parents, Kate and Marc, tried to help Dillon scale back, the rage and frustration was intense whenever it was time to turn the games off. There was never an end point or feeling of lasting success, no matter how much time was given. It was like giving a kid only one bite of a delicious cookie (or as Kate observed — “more like one sniff of crack cocaine.”) The begging and pleading for more time was almost constant. Even when it was turned off, he always knew those Minecraft battles were going on online, without him. It consumed his mind and his friendships, and nothing else seemed nearly as important to him.

When Kate and Marc were coming to the decision to no longer allow their computer to be used for addictive online games, they presented it to Dillon carefully and gradually, receiving coaching at the same time, to maintain perspective and focus. They developed a three-fold strategy:

1. They evaluated their current activities.

They started by developing a system and a chart to rate all their different activities for social, cognitive, physical and spiritual benefit, divided by the length of time it consumed.  Teaching Sunday School together ranked highest, and playing video games ranked lowest (even by Dillon’s admission) when the length of time invested was factored in. This activity helped Dillon understand the relative value of different activities and really begin to understand why screen obsession could be a problem. They all worked on a plan to adjust family priorities and time use.

2. They did a three-week family technology fast.

Together they all experienced the impact of turning off their screens (except for minimal workplace and school use). They chose the start of the school year when Dillon would be busy and distracted by other things as much as possible. During this time, Marc and Kate went out of their way to provide many fun family activities on the weekend and during free time — including sports events, social gatherings, board games, outdoor games and activities, special foods, time together, and so on.

Once they completed the fast, Marc and Kate wanted to make the permanent prohibition of online gaming at home more tolerable, and help Dillon accept the change without lasting bitterness.

Although we’d love to tell you it was an painless shift to get Dillon off of his addictive games — it was just not so. Marc and Kate could have gone the route of many parents with good intentions, who get railroaded by their child’s intensity to fight for their exciting, gratifying, “glowing drug” and simply give in. It took incredible determination and perseverance to help their son as he gradually matured through this challenge.