How To Cook a Stepfamily 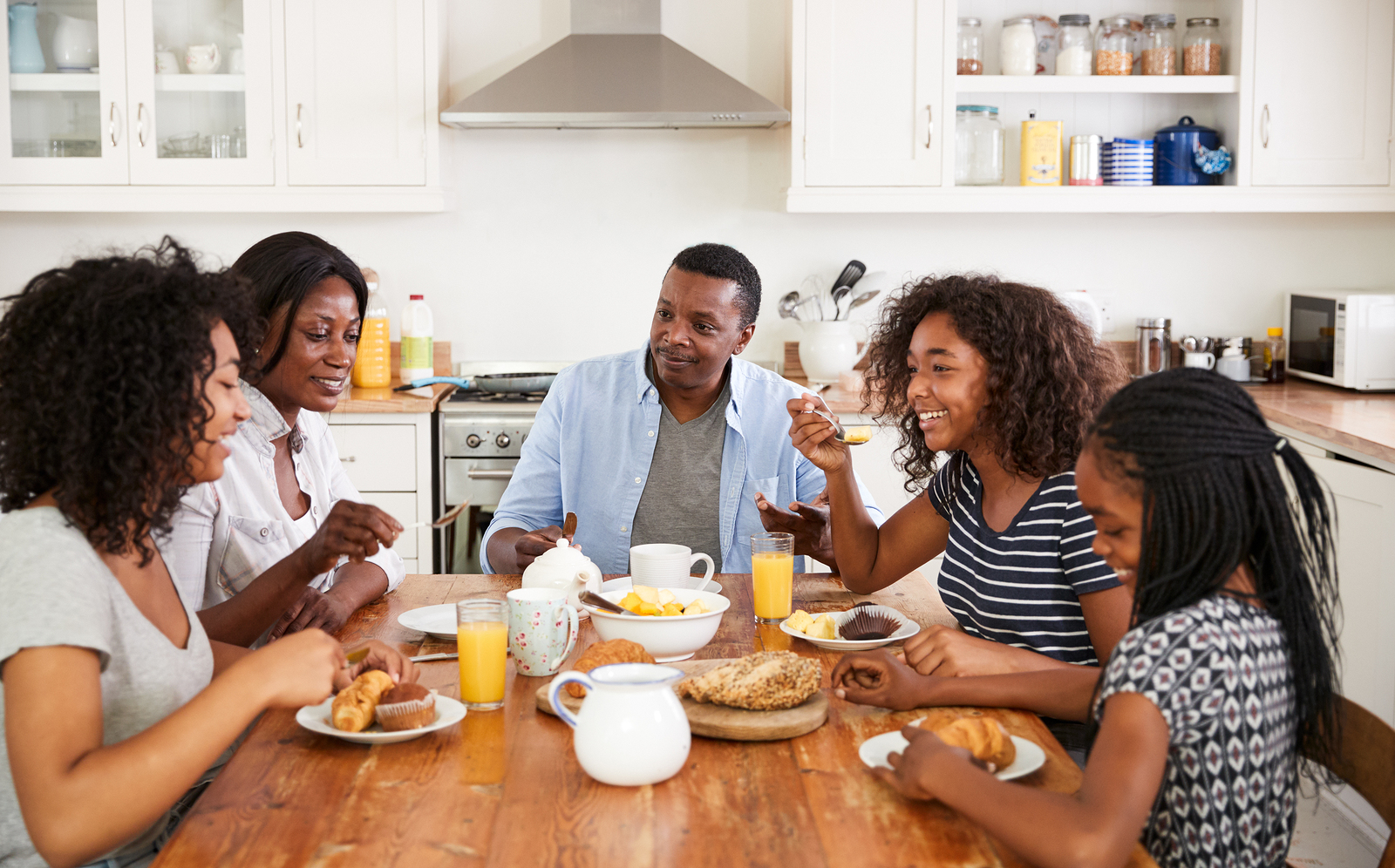 Whether we realize it or not, stepfamilies likely assume a specific integration style. By that, I mean a set of assumptions about how a stepfamily “ought” to come together. I like to use cooking as an analogy to identify some integration styles that stepfamilies attempt to utilize. Let’s start with the ones that generally don’t work.

This mentality assumes all ingredients can be whipped together into one smooth mixture. I’m sure we’re all aware that the most common term used to refer to the stepfamily is “blended family.” But those of us who specialize in stepfamily therapy and education do not use the term “blended family” simply because most stepfamilies do not blend — and if they do, someone usually gets creamed in the process! When cooking, blending is a process by which we combine ingredients into one fluid mixture: think of a fruit smoothie or a cream soup. Rarely can it be said that a stepfamily becomes “one” in a relational sense. More realistic is a process by which the various parts integrate, or come into contact with one another, much like a casserole of distinct parts.

It is quite normal for a stepparent to have close bonds with one stepchild, be working on bonds with another, while experiencing a distant relationship with an older child.

Relationships will be different within the same stepfamily, not one fluid mixture.

These stepfamilies chop up one another’s history and attempt to instantly combine all ingredients with rapid speed. When love doesn’t occur right away, people are left feeling torn to pieces; no one remains whole.

A classic example of this mentality is the adult who demands that the stepchildren call their stepparent “daddy” or “mommy.” It is as if the child is told, “We’ve chopped up your real dad and thrown him to the side. This is your new dad.” Some parents actually think their children will buy that.

These families refuse to be defined as a stepfamily and seek to heat the ingredients in rapid fashion so as to become a “nuke-lier” family (pun intended). They avoid labels like stepfamily and the implication that they are different from any other family. People tell me they resent being called a stepfamily, because it makes them feel second-rate. There is nothing inherently wrong with being a stepfamily; it is neither better nor worse than other family types, just different.

A major barrier to healthy stepfamily adjustment is a parenting team that denies this reality. Consciously or unconsciously, people often try to make their home to be just like their family of origin or their first family — only better. “After all,” someone might say, “the Brady Bunch did it. Why can’t we?”

Coming to accept each family’s unique challenges and opportunities is a tremendous first step to finding creative solutions to  family dilemmas. If we refuse to admit a difference, we inadvertently shut off our ability to learn new, more effective ways of relating.

This family cooking style results in ingredients and spices (that is, rituals, values, and preferences) being put under pressure to meld together completely. The family is under great duress, and since expectations are so high, the lid often blows off the pot.

An example of the pressure cooker mentality is when stepfamilies assume that the answer to every conflict in holiday ritual is to combine the traditions. It’s important that stepfamilies understand that combining rituals works sometimes, but pressuring people to be OK with the combination can sabotage the results.

An example of the trouble this creates can be illustrated by the following example. Paul and his children developed a meaningful Christmas tradition in which each person opened one gift on Christmas Eve and the remaining gifts the following morning. However, his new wife, Sharon, and her children held the tradition of opening all the gifts Christmas morning after a special breakfast.

In a panic, Paul called a few weeks before their second Christmas together. “I’m dreading Christmas this year. Last year Sharon and I combined our holiday traditions and it was disastrous. To honour my family, we had all the children open a gift Christmas Eve, and to honour Sharon’s family we had breakfast and opened the remaining gifts. But no one liked the outcome. Everyone acted as if we were at a funeral instead of a celebration, and eventually Sharon and I ended up in a fight that lasted through New Year’s Day. What are we supposed to do this year — go to our separate corners and pray no one throws a punch?”

Finding what works during the holidays sometimes takes trial and error, but pressuring people toward acceptance only leads to error.

Like a salad, this style throws each ingredient into the air with no consideration as to where it might fall. The ingredients keep some of their integrity, yet are expected to fit together with the other pieces. Examples of this style can be subtle or extreme.

When one child is spending time at their other home, remaining children often believe they can play with the absent child’s toys or belongings. Children should be taught that even though someone is temporarily away from one home, the absentee’s stuff is not free game. Respecting one another’s possessions is important because it teaches people to honour others; it also communicates belonging to the child who is spending time at the other home. “You may be at your dad’s house, but you still have a place here.”

So if all of these integration styles are generally not helpful, what style should be used? I recommend a crockpot cooking style. Stepfamilies choosing this style understand that time and low heat make for an effective combination. Ingredients are thrown together in the same pot, but each is left intact, giving affirmation to its unique origin and characteristics.

Slowly and with much intention, the low-level heat brings the ingredients into contact with one another. As the juices begin to flow together, imperfections are purified, and the beneficial, desirable qualities of each ingredient are added to the taste. The result is a dish of delectable flavour made up of different ingredients that give of themselves to produce a wondrous creation.

The key to crockpot stepfamilies is time and low heat. I’ve already stressed the importance of being patient with the integration process and not trying to force love, care, or togetherness. Often, in an attempt to quickly combine various ingredients such as people, rituals, and backgrounds, stepfamilies use the food processor, microwave, pressure cooker, and blender integration styles. Such an effort almost always backfires, bringing a backlash of anger and resentment.

None of these things can be rushed. Adults who are trying to prove to their parents, friends, church, minister, or themselves that their remarriage decision was right for everyone, push their family to “blend” quickly. But they are often greatly disappointed and feel like failures.

A slow-cooking mentality invites the family to relax in the moment and enjoy the small steps the stepfamily is making toward integration, rather than pressuring family members to move ahead.

Cooking with low heat refers to gradual, intentional efforts to bring the parts together. It is working smarter, not harder. Let’s contrast some crockpot approaches to the examples of what not to do.

As a crockpot stepfather, you don’t worry excessively about why you’re not immediately bonding with your teenage stepdaughter. Slow-cooking stepparents understand the cardinal rule of relationship development with stepchildren: Let the stepchild set the pace for the relationship. If the child is receiving of you, then openly return the child’s affections. If she remains distant or standoffish, find ways of managing rules and getting through life. But don’t insist a child automatically accept authority or physical affection.

The food processor adults have a similar struggle. They want the children to refer to their new stepparent with a term of endearment. When this doesn’t happen naturally, the food processor parents demand they do so. But a crockpot adult would understand that a stepparent can be “daddy” to his youngest stepchild, “James” to his next oldest, and “Mr. James” to the teenager. Crockpot stepfamilies recognize the emotional and psychological attachment children have to biological parents and don’t force them to change those attachments.

And Paul, the pressure cooker stepfather who finally turns to the crockpot method, would encourage his stepfamily to develop an entirely new Christmas tradition. He and his wife, for example, might have a series of family meetings with the children to discuss their preferences and wants. It may be that they decide on an entirely new tradition to honour each family’s history by alternating how gifts are opened, or they may decide to let each parent and their children keep their own tradition.