Are You Humble? Six Ways Your Spouse Can Tell 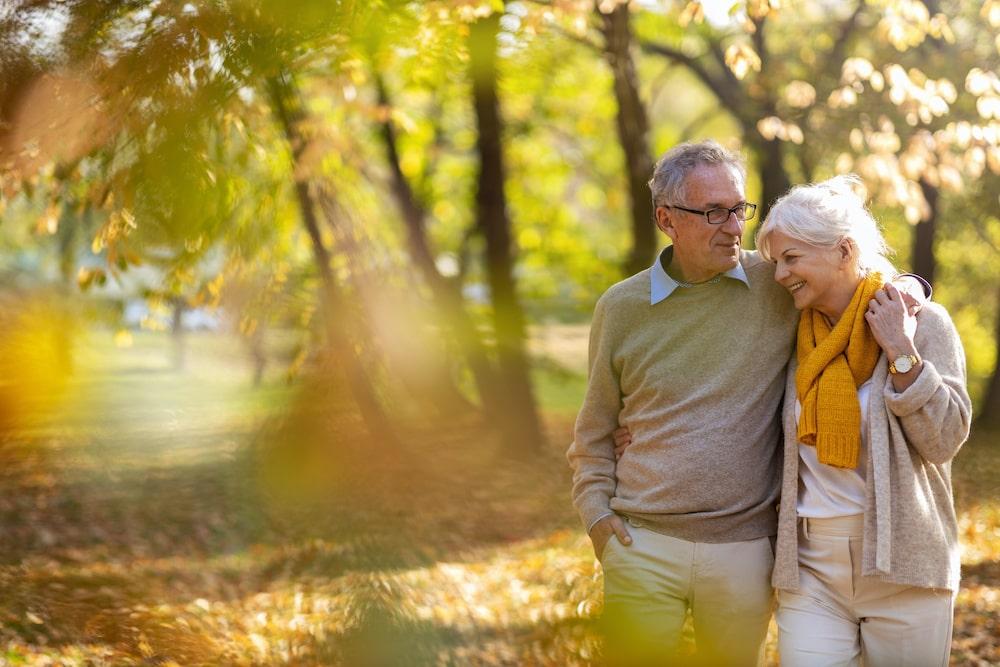 Mac Davis sings, “Oh Lord, it’s hard to be humble, when you’re perfect in every way.” The odd thing is, we may search for the perfect spouse, but if we marry someone who thinks they’re perfect, life together usually isn’t.

But asking people, “Are you humble?” can turn weird. If they say “yes,” they seem proud. If they say “no” they’re honest, but probably humble too. This conundrum can give us the willies in marriage. It seems everyone can spot a braggart, but how can we tell when our spouse is humble? Does humility contribute to marital bliss, or does it just grind on us like the voice of droopy-eared Eeyore?

Ben and Hannah have been married 41 years, and their relationship brims with the warm serenity of two people stably in love. Hannah works at a university connecting students’ parents to campus life, and Ben manages the condominium complex where they live on the west coast.

When asked, “What is humility?” Ben answered, “It means that you are willing to put others ahead of yourself. Not building yourself up — especially at the expense of others.” Hannah echoed Ben. “I think humility is putting other people first,” she said. “It’s being willing to do things for people without expecting anything in return.” This doesn’t mean humility shows itself in hopeless servitude. “That’s martyrdom,” Hannah clarified. “I don’t mean that people can push me around. If I see that someone needs help, I help freely. But I’m not a doormat.”

Ben and Hannah shared openly about how they show — and see — humility in their marriage. Their insights reflect the findings of various experts as well. Here’s what we can learn from them.

1. Acknowledging Your Weaknesses and Strengths

Some have the wrong idea that humility is feeling badly about yourself, or pooh-poohing your own accomplishments. But low self-esteem isn’t humility. It’s feeling like you’re not worth much. If you have ever complimented your spouse for a great meal or a fun date only to hear, “Ah, it’s nothing really. Anyone could do that,” you may have heard false humility or outright self-denigration. True humility, in contrast, is having an accurate perception of your weaknesses and your strengths, and keeping both in perspective.

Humility tempers our urge to puff ourselves up over our gifts or tear ourselves down for our shortcomings. Ben sings bass in a quartet and blesses congregations and crowds. Hannah leads the women’s ministry executive at their church. While Hannah may not be very musical, and Ben not much of a group leader, they don’t dwell on these weaknesses, but eagerly apply their gifts to encourage others. That’s the spirit of humility.

2. Putting Each Other First

Six years ago Hannah suffered from cancer and required surgery. At the same time she and Ben were struggling financially because he was underemployed. “I’ll never forget coming home that day from surgery,” Hannah said, “when finances were pretty tough and I was going to be off work. Ben had all this pressure of not knowing what was going to happen to me, the financial pressure, the job situation, and I’ll never forget returning home from the hospital. He knew I was coming, so he painted our bedroom this beautiful dark green — like a place of solitude. He didn’t let anybody phone me or bother me. He just took care of me. He put everything else aside. He knew it would make me feel good.”

Ben could have withdrawn from the stress of Hannah’s illness and his poor work situation, but he chose instead to put her needs first. Ben and Hannah wove similar acts of kindness throughout their marriage during good times as well. They enjoyed initiating “little things” such as running the other’s bath water, taking out the garbage, opening a car door, or making a meal. Humility might lead to showy displays like painted bedrooms, but more often it’s woven into expressions that subtly say, “You count.”

3. Accepting Advice From Each Other

When was the last time you asked for directions when you got lost? Husbands stereotypically have a hard time asking for help because they think it indicates personal weakness — namely ignorance. They don’t want to look stupid. Unfortunately, not asking advice from others signals another personal weakness — namely pride. Pride, long considered one of the seven deadly sins, is the antithesis of humility. Strangely, proud people believe they’re sinless, not sinful. They also feel more gifted than others, and deserving of unearned honor. Some accomplish great things in their work life or church life, and attribute their success to their own doing, not to God or help from others.

Not surprisingly, proud individuals rarely accept advice from others. Why should they, if they own their world and the world owes them? While Ben was not chronically proud, he still fought Hannah’s advice regarding his employment. Ben wanted badly to earn a living in cabinet making, and poured energy into the business. But the business struggled. And Hannah was forced back to work. And they fought over it. But Ben was obstinate. Eventually Hannah just had to let it go. Hannah’s friends told her she had to turn Ben and the situation over to God. God had, and would, meet their needs, they noted. “So I just freed Ben up to do it,” Hannah recalled. “I just said, ‘OK, go for it, and let’s see what comes of it.’” That was hard for me, but probably best I should have done it six years ago. I quit fighting it and let him do what he felt was right for us.” Hannah could have kept fighting, and haranguing Ben with advice, but Ben probably would have dug in his heels only deeper. It seems that Hannah’s humble blessing of her husband’s dream made the difference.

Humble people also know when they’ve hurt their spouse, and admit it. They take responsibility for their actions, especially in conflict situations. Vincent Jeffries, who studies humility, says, “Without humility it is very difficult for individuals to admit failure and the need to change, which can make conflict management difficult.” Hannah lacked this kind of role model in her father. Her dad was a BMAC — a “big man at church.” He swaggered a lot, talked big, and sought to control others. “My dad was a dreamer,” Hannah said. “He was always going to be the mayor or the big shot and he always said he was going to run the church. My dad was a fighter. When he got on a committee, he fought. He was always stepping on people, Christian people.” Hannah’s father represents the braggart we spot easily. We’re not surprised when such people deny their wrongdoing or minimize the hurt they’ve caused. Such people are put easily on the defensive. “You shouldn’t feel that way. I didn’t mean to hurt you!” they might scold.

Humble spouses own their wrong, and the hurt it has caused, even if it’s unintentional. A husband may mindlessly forget an important anniversary, but that doesn’t excuse the hurt, and a wise man owns up to it. A wife might accidentally leak something to a girlfriend that her husband wished kept confidential. A humble wife confesses the slip. Some people think if they weren’t intentionally mean or forgetful, they shouldn’t have to admit fault. Such thinking would allow us to go through life with reckless abandon leaving many in our wake. If you accidentally stepped on the toe of the First Lady, would you shrug it off and say, “I didn’t mean to, so get over it”?

When there’s hurt in a marriage two things should happen. The offender needs to admit it and apologize, and the person offended needs to offer forgiveness. When we don’t offer forgiveness, the hurt turns to anger, resentment, and possibly rage. Recently Ben and Hannah were supposed to attend the funeral of a man from their church. Ben was in charge of the social calendar and told Hannah they would drive to the church after her doctor’s appointment. At noon Hannah got a call from Ben. He’d messed up. The funeral was at 11:00. They missed it. “He felt really bad,” Hannah said, “because it was someone we knew quite well. I probably could have said, ‘Oh how could you be so stupid?’ That would have been the arrogant way. But I empathized with him and then when I got home, we just kind of hugged each other and said there is nothing we could do.”

Hannah’s response reflects the wisdom of Christian marriage counselor Everret Worthington. He suggests that the process of forgiveness begins with empathy, and ends with a public show of commitment. First, we empathize with those who hurt us, acknowledging that we, too, could have done the same thing (and have). Then we forgive them in our heart for the wrongdoing. But ultimately our changed heart needs to be shown through some act of commitment — such as forgiving the person with words, or performing a small act of love toward them, or, in Ben and Heather’s case, holding hands when they pray. “Holding hands kills conflict,” Ben said, “and assuming you pray at least twice a day means you can’t be mad any longer than twelve hours!”

6. Not Gloating or Criticizing

Few of us like a know-it-all, and fewer like a know-it-all who’s right. Fox Broadcasting’s character Gregory House, MD, makes great medical drama, but none of us wish for similar arrogance in our spouse. Rather than gloat like House, a sign of humility is to use a “one-down” statement. Compare “Hey, there’s the restaurant. I’m glad we made it” with “Well, would you look at that! I told you it was on Hunter Drive!” Ben reflected on times when he’s right, but chooses not to gloat. “Sometimes,” Ben said, “when we’re going somewhere in the car I’ll say it’s this way, and she’ll say it’s that way. If I turn out to be right, then I have to play that down, I should play it down, otherwise I’m demeaning her. If I am wrong, I would hope that she would not lord it over me.”

Ben makes a good point. How do we wish to be treated when we’ve made a mistake? We don’t like being belittled. We want respect even when we’re wrong. A study with 70 married couples indicated that the more spouses thought their partner was humble, the more satisfied they were with their marriage. No surprise! Ben and Hannah seemed satisfied in their marriage. They affirmed that showing humility is more action than talk. We show it in little things. Are you showing humble signs? Which can you check as true?